Skip to content
First and foremost, wish you all a Very Happy New Year 2015!! Hope this year brings nothing but happiness and takes all your sorrows away.. A New Year means a lot of things to a lot of people. A new beginning, a fresh start, a new goal or just to make everything a little better than last year. I am no different. I am not one to take resolutions and have strict determinations. But I do hope to make a difference somewhere in any small way I can. Achieve a few goals and set a few things straight. And what better day for a little introspection than 1st of Jan right? 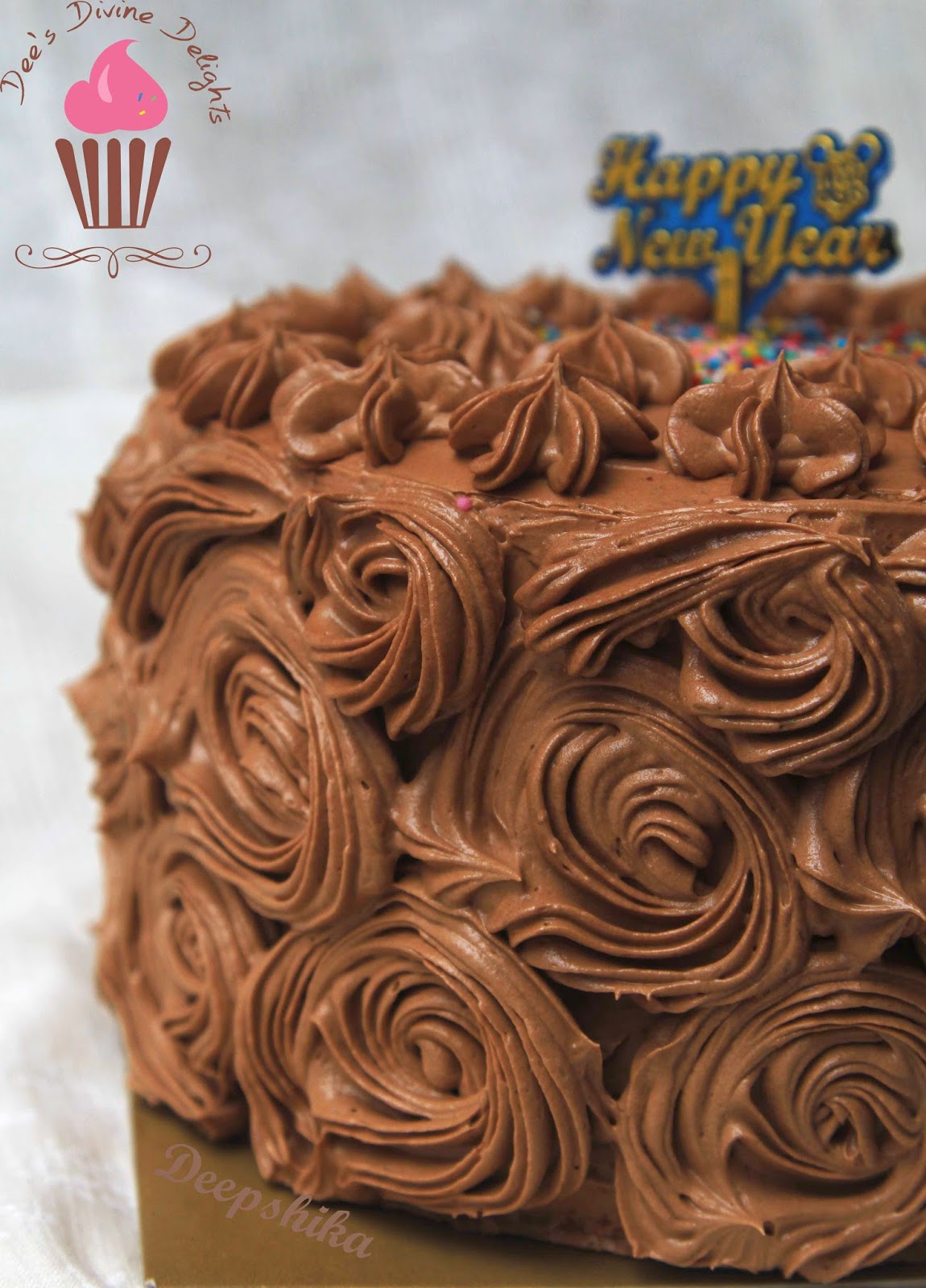 Anyway, New Year’s eve calls for celebration. Whether you are out and about with friends, partying into the new year, or at home, having fun with family, nobody goes through the midnight hour without celebrating.. So this year, we had a small family get together at home and being the baker of the family, I was put to the task of making a cake. Which was easy because I had already made up my mind whenSubhashiniposted the Neapolitan Cake recipe  in November, that this would be my new year cake! Just looking at the layers made me drool. I was fascinated with Neapolitan Cakes from the first time I laid eyes on them, back when I started baking. Every baking blogger worth their salt (sugar?) has made this or some variation of the cake. Though I am not much of a History person, I really wanted to know why this cake is made the way it is- Vanilla, Chocolate and Strawberry and why is it called Neapolitan? I did some digging around and came to a satisfactory conclusion. 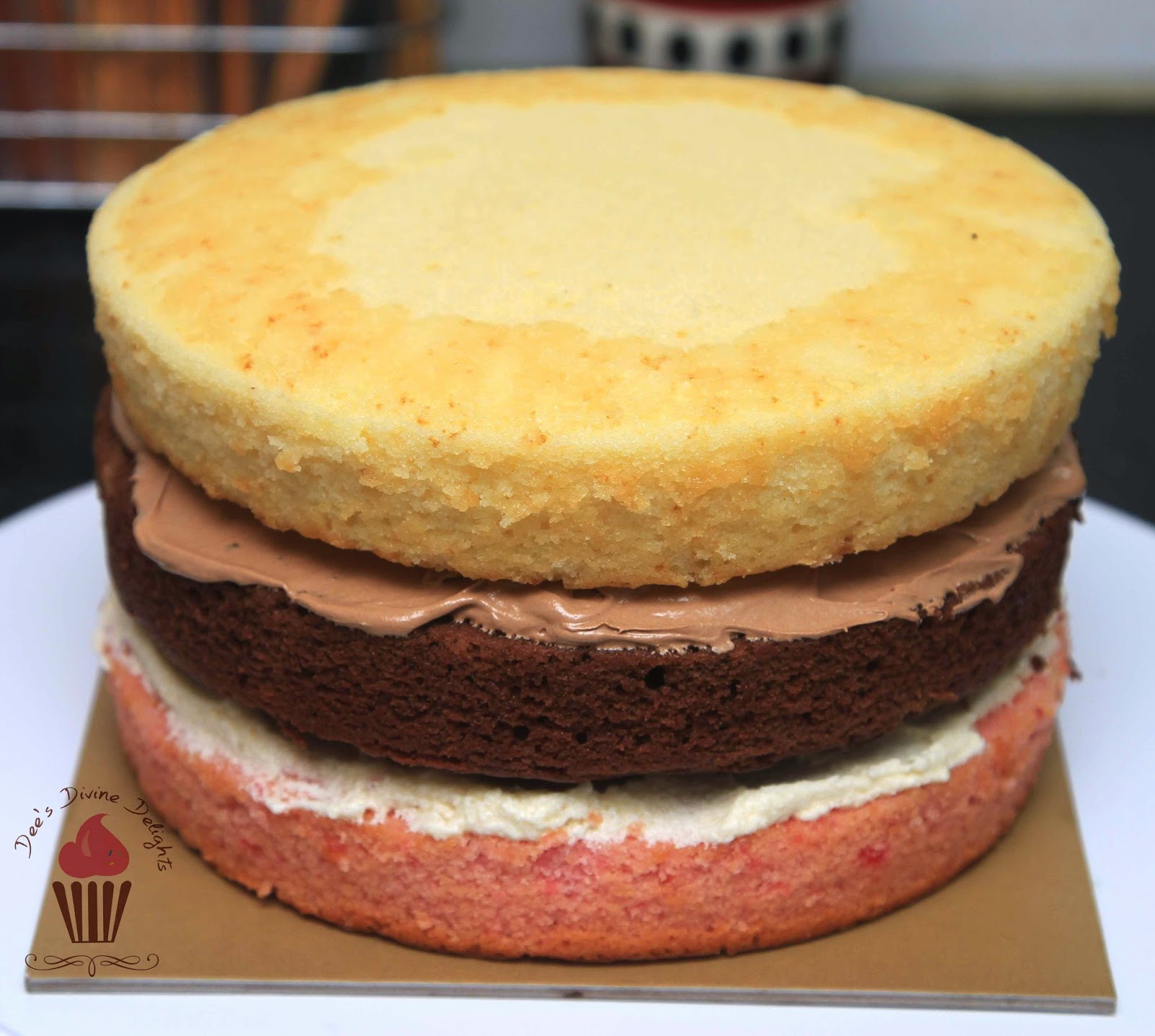 Neapolitan means “originating from Naples- a city in Italy (known as Napoli in Italian)”. The Neapolitan cake is actually derived or rather inspired from Neapolitan Ice-Cream. Yes, the flavors were originally an ice cream. There is no evidence or proof to show that the ice cream originated from Naples. In fact, the ice cream was more famous in Paris than in Italy. But at the time (19th century I gather) the Parisian ice-cream makers were none other than Italians, especially Neapolitans. So, the name. After inventing gelato and ice cream, the ice-cream makers were set with the difficulty of creating something new. They came with the idea of combining different flavors into one ice-cream. The term Neapolitan was generally used to describe any ice cream combining 3 flavors. Initially the flavors used were- Pistachio, Vanilla and Strawberry (or Cherry) to represent the Italian Flag. But as time passed, the more popular flavors at the time took over and became the unofficial Neapolitan flavors. Still, there is no official flavor combination for this intriguing dessert but now the Neapolitan Ice-cream and from that the Neapolitan Cake are known for this trio – Vanilla, Chocolate and Strawberry. 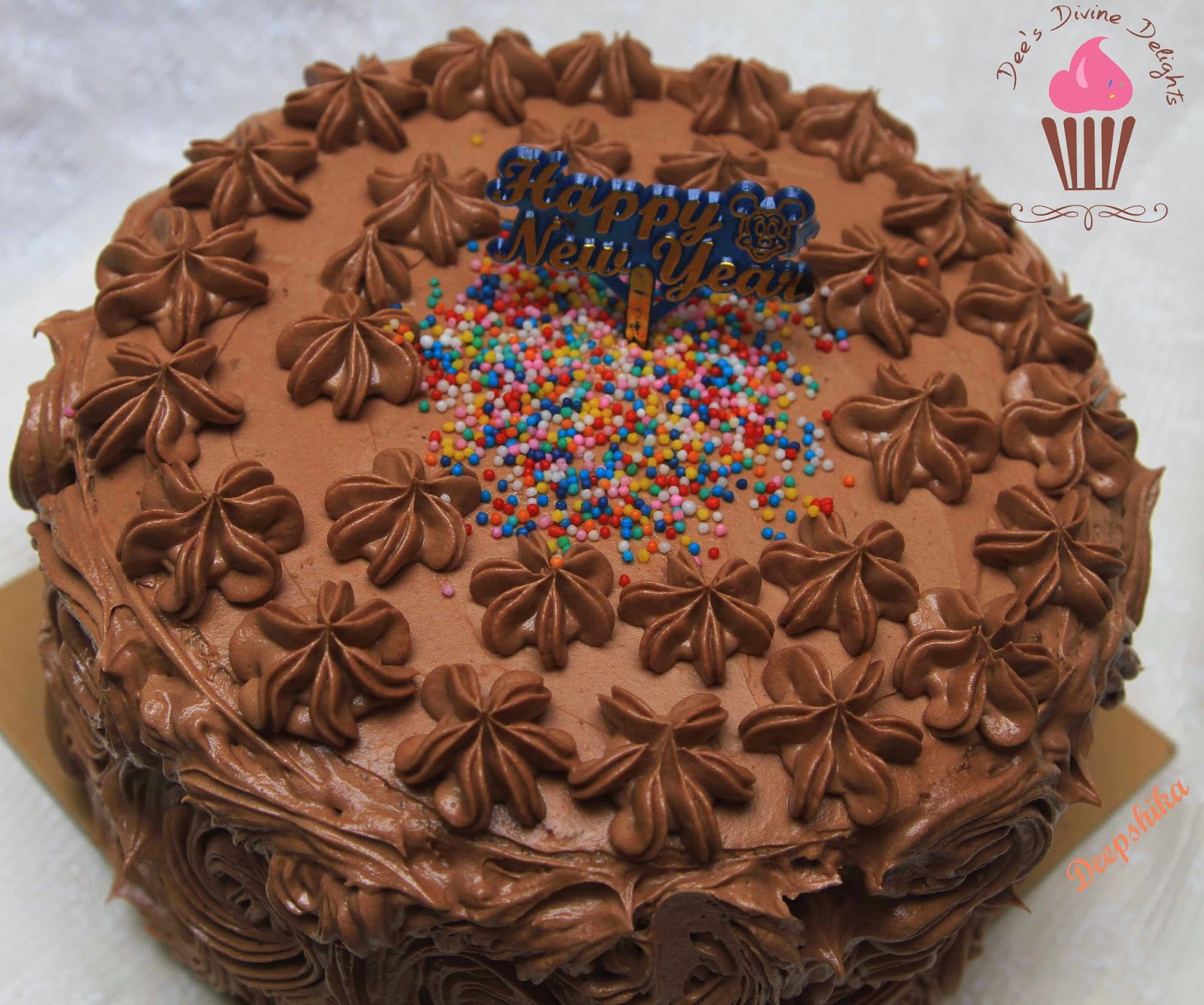 Now that we have the history out of the way, let us dive right into the cake. Ahh! What can I say about the flavors? You need to taste it to know what a divine combination the trio make! Layers of soft and tender sponge cake with flavors of strawberry, chocolate and vanilla bursting through every bite. It is a cake worth making, believe me! Just look at it!! 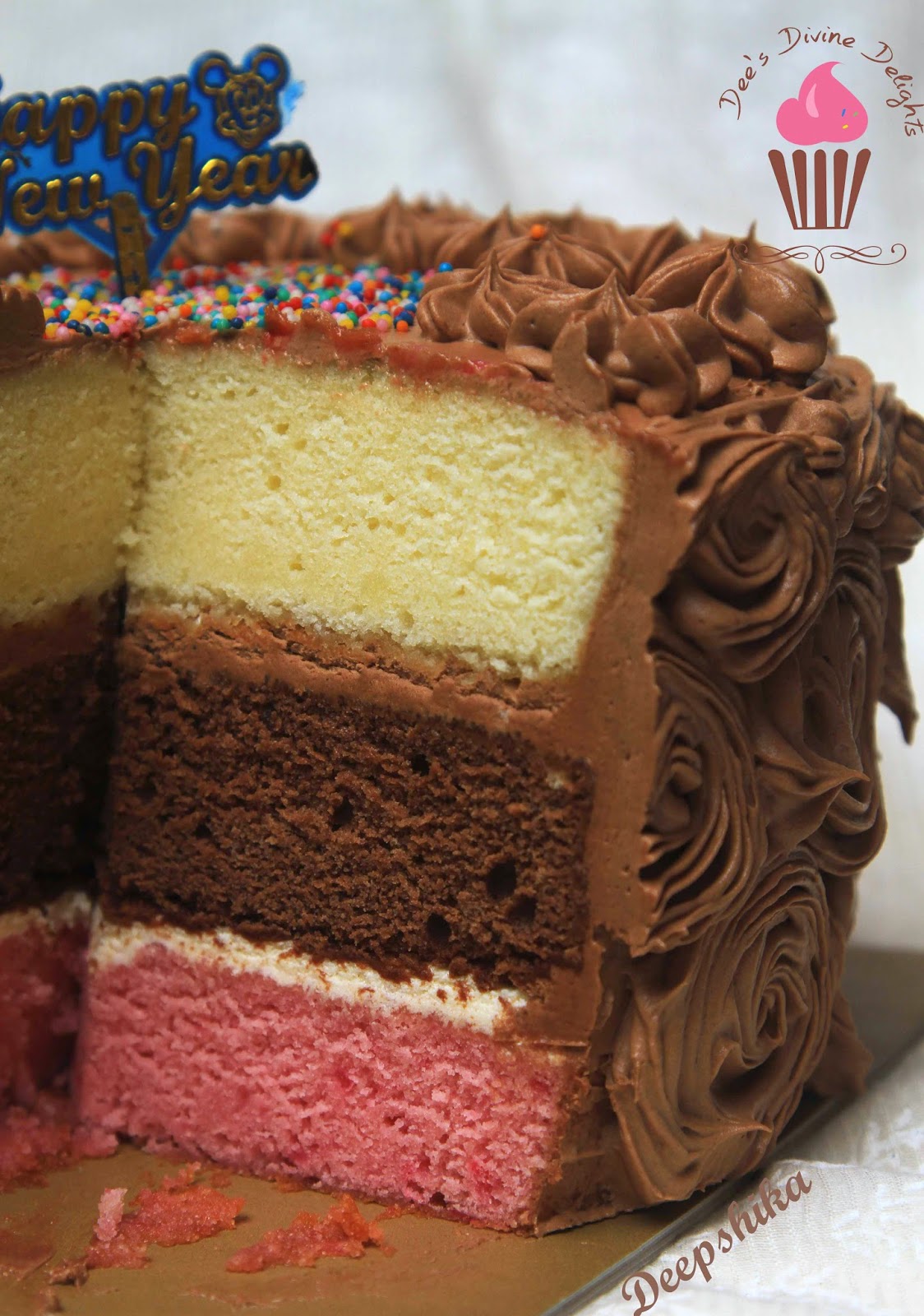 I used Nutella frosting to frost the cake because the children in the family are huge chocolate lovers and I didn’t wanna overpower the other flavors of the cake by using chocolate frosting. So I settled for Nutella, a win-win. The children were also satisfied and I too felt the frosting complimented the cake in a strange way. But I definitely wanna try it with the custard cream used in the Fondbites recipe. I am sure that would allow us to taste the flavors of the cakes better. For filling the cake, I used the same nutella frosting in one layer and some Cooked flour frosting I had left over from another cake I had made, to take some of the attention away from the nutella..! 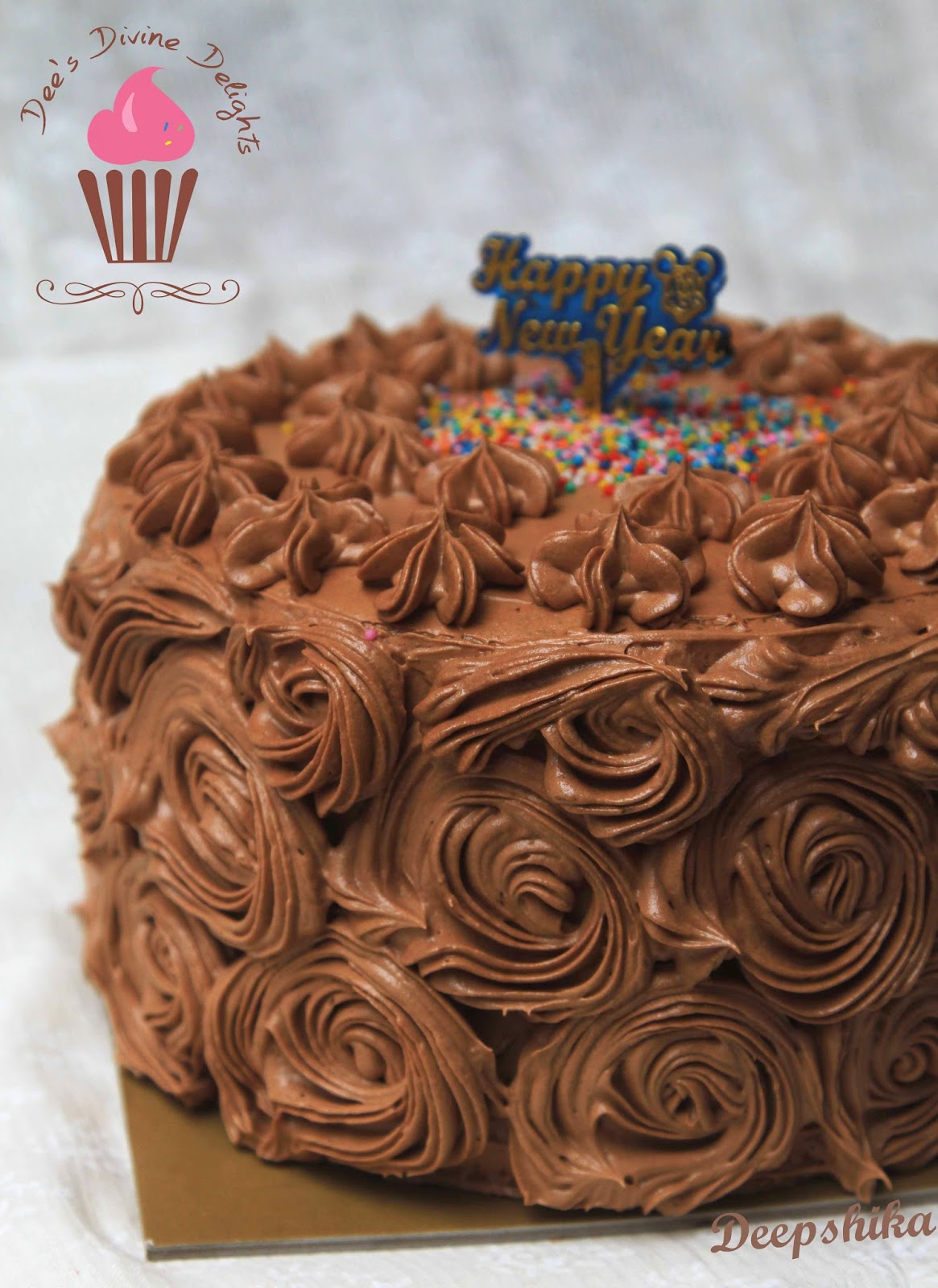 You can get the recipes I used in the following links-
Neapolitan Cake
Nutella Cloud Frosting
Before I finish up, here is a last tid-bit I found interesting and amusing. The Neapolitan Ice-cream is sometimes known as Harlequin Ice-cream. Why? Harlequin refers to a character who was a jester or clown in an Italian form of theatre art known as “Commedia dell’arte” (comedy of the craft of improvisation). He is usually represented in diamond patterned multicoloured tights. Since the ice-cream is also colorful like the jester, it was called Harlequin Ice-cream!! Isn’t that cool?? Just for reading my post, here is a slice for you to enjoy 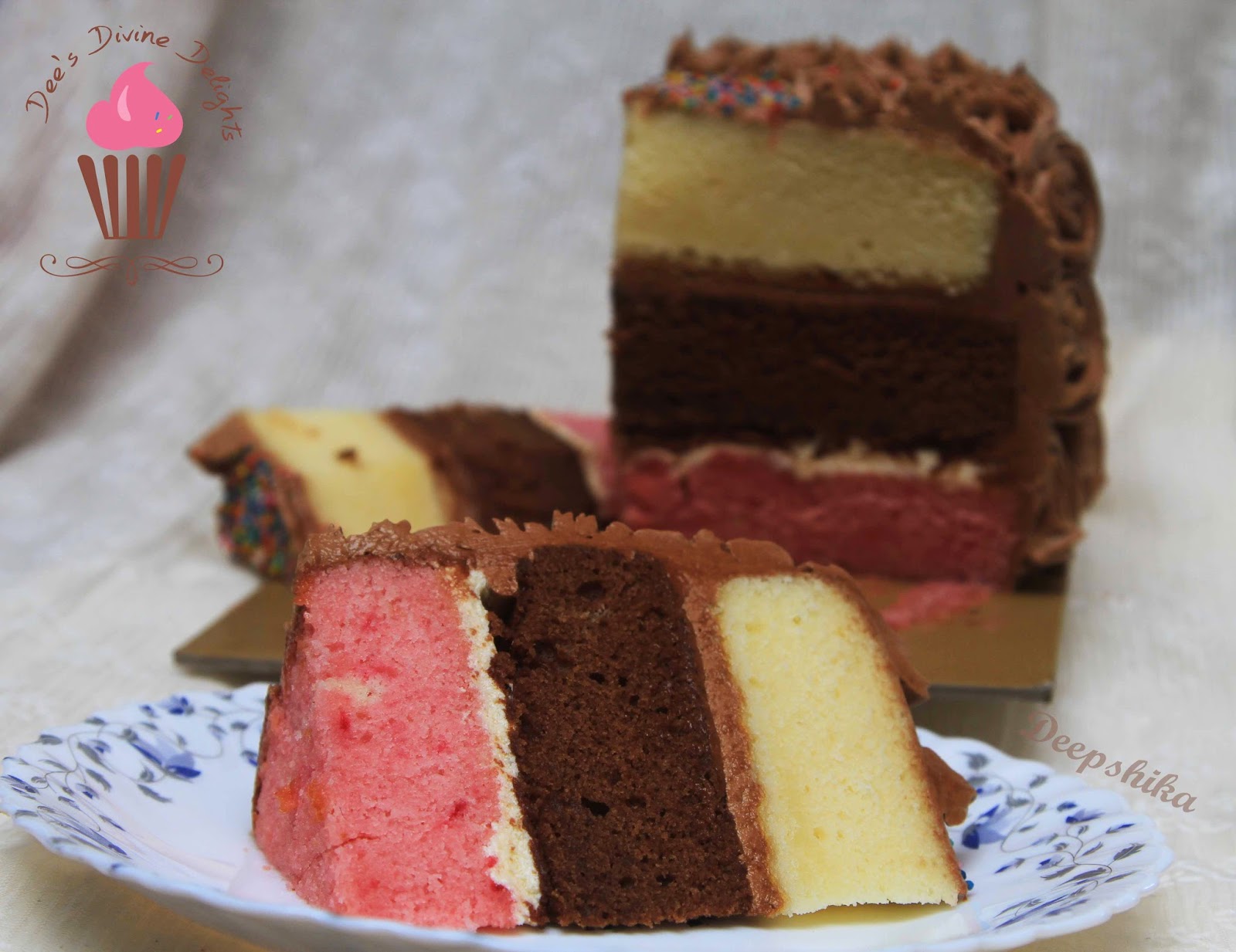 Please don’t worry- I have not taken up a sudden liking to History. Just thought I will make the first post for the New Year a little interesting

Hope you liked reading it as much as I liked gathering the information.
Until we meet again, keep smiling and Happy baking

This has been baked for Fondbites, Bake Along, a group of enthusiastic bakers who bake one recipe every week.


Information I have provided here is taken from a lot sources over a period of time. The main sources being: Of Sugar and Snow: A History of Ice Cream Making, CakeSpy, eHow, Wikipedia and a few more.

One thought on “New Year, a Neapolitan Cake and some History”